Well, I seem to have ruffled a few feathers with my previous post about the National Landlords Alliance.

First, there was this helpful post on the Property118 landlords’ forum:

Thanks for all the extra traffic, guys. Let’s be clear, though, asking questions of one landlord organisation doesn’t make me an “anti landlord spin Doctor.”

Then there was this charming suggestion that landlords should, apparently, blacklist me: 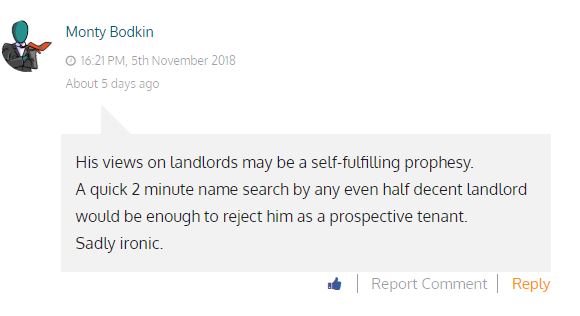 Cheers “Monty”, at least I have the balls to post under my own name. The idea that landlords should police the social media postings of prospective tenants for signs of ideological impurity isn’t at all creepy.

However, the Alliance (or at least it’s self-appointed CEO Larry Sweeney because, let’s face it, it’s just him) seems to think I’m using a fake name:

No, I’m not conducting a ‘hatefest’ and I am posting under my own name. Oh, and for the avoidance of doubt:

What is instructive, however, is that Sweeney then blocked me, for having referred to the membership status of the Alliance. So allow me to set it out clearly here.

The National Landlords Alliance Ltd is a company limited by shares. As a matter of law, the members of a company with shares are the shareholders. It doesn’t appear that Sweeney is selling shares in the company, so whatever people are paying for, it isn’t membership in the legal sense.

At the very best, all that ‘members’ are getting is some kind of associate status. Members are not getting the rights of members as they would be understood in any other organisation. They do not own the Alliance. They have no control over it. They do not set its policy. They have no influence over what happens to their money once they have paid it. Sweeney can post whatever he likes in their name on the Alliance’s twitter feed or website and there is nothing they can do about it at all.

I would be genuinely interested in what members of the Alliance have actually received in return for your membership fee. Of course, ‘members’ get the warm feeling of having contributed their money for a cause they believe in. But if you’re giving your money on that basis, you’re not becoming a member, you’re making a donation. There’s nothing wrong with that – most people like to donate to causes that are important to them from time to time – but if you’re soliciting donations then you should make it clear that’s what you’re doing. If you like my blogging you can buy me a coffee but it would be wrong for me to pretend you’re doing anything except making a donation.

Let’s be crystal clear. Shelter are an organisation which provides advice and guidance, and which undertakes campaigning. Like all charities, it has to be open about its accounts and it publishes an admirably clear Annual Report setting out where it gets its money from, and where it goes. Don’t take my word for any of this; read it for yourself. The idea that Shelter isn’t open about what it does is just plain wrong. And like all charities, it’s not free to spend its money however it likes (still less like Larry Sweeney likes), it is required to spend all of its money to further its objects. And the funding it has received for specific purposes – its restricted funds – it must spend only for those purposes. People donating to Shelter do so with the full knowledge of what their money is going to be spent on.

This really isn’t a difficult idea to understand: in a free society people are free to donate their money to an advice and campaigning organisation if they want to, and it’s not up to Sweeney to tell them they can’t.

Having previously called for Shelter to be abolished and its assets seized (you’d think that landlords would show a bit more respect for private property and would oppose the Stalinist expropriation of that property, but it’s a funny old world I suppose), Sweeney’s latest wheeze is to demand that Shelter should spend all its money on acting as guarantors for tenants on benefits. Over the past few days he’s tweeted the same demand around thirty times:

Now, rent guarantee schemes are a good idea, several charities and local authorities offer them. Because Shelter are full of helpful advice and guidance, you can read more about them on their website. But Sweeney’s idea is transparent nonsense, because that’s not what Shelter’s money is for, because so long as they obey the law it’s up to Shelter and their funders what they spend their money on, but mostly because it’s complete balls to say that Shelter has a “cash pile” of £60m or anything like it: it’s their entire annual income. It’s no more correct to call it a cash pile than it would be to say I can spend the whole of my annual salary in one go. It would mean Shelter’s abolition, since they’d have no money for anything else.

Sweeney spent most of Saturday involved in a bizarre Twitter spat with Labour MP Karen Buck, claiming that Buck supported his plan:

Which, naturally, she strongly denied:

Where on earth did you get this from? It’s nonsense!

All of this seems to be because he thinks that Buck liked one of his tweets, which she denies (you can look at her likes yourself and see if it’s true, it doesn’t appear to be) but in any event liking one tweet doesn’t signify complete and unconditional acceptance of your programme.

Now, anyone sensible would let the matter drop at this point. There’s no point in saying someone agrees with you when they deny it, it just makes you look stupid or dishonest or both. Sweeney, however, is less sensible and now claims that Buck really did support his plan, but for some reason has been “intimidated” into silence by Shelter:

There appears to be no evidence to support this at all. There is no reason to suppose that Buck supports Sweeney’s plan, and every reason to suppose she doesn’t: it is completely at odds with her other work and beliefs, including her work with Shelter on the Homes (Fitness of Human Habitation) Bill. Nor is there any evidence to suggest that Shelter have intimidated anyone.

Again, all of this is merely because Sweeney and similar landlords find it personally inconvenient that tenants should have access to decent advice. You can respectfully disagree with Shelter without descending into the kinds of abuse that Sweeney has employed in his Twitter feed in recent days.

But if you are a landlord who has joined the Alliance: all of this is being done in your name, and there is nothing you can do about it.

One thought on “More on the National Landlords Alliance: they don’t like it up ’em.”

Who owns England?
TIDES OF HISTORY

Save the BBC
The Norton View

To Serve To Mock To Annoy

A History of England in 100 Laws

Telling the story of England through its laws.

The ramblings of a former DWP Civil Servant ...
Self-publishing adventures

Attempting a rational exploration of the issues of our time

The House of Commons Library blog

Blogging on all things legal